It’s nice to sit down to lunch and bask in the feeling that you actually got something important taken care of in the morning other than arguing politics with people you don’t know on Facebook.

When I’m going to be sedentary, like I have been over the winter anchored here at the lower end of Anna Maria Island, Florida, I like to employ two anchors. I set my 25 lb Manson Boss anchor and its 25 feet of 5/16” chain and ½” nylon rode out to take the weather coming from the south. The 25 lb Danforth with its 25 feet of 1/4” chain and ⅜” nylon rode was deployed to the north to handle weather from that direction.

It all worked as it was supposed to through the winter months, but for the past month or two I’ve noticed that the Danforth’s line has been more or less lying parallel to the Manson’s line. But when I’d pull on it from the bow it appeared as if the two were at a decent angle to provide good holding from storms coming in from the north or south. In addition to the wind blowing the boat in one direction of another the tidal currents flood twice a day towards the north and twice a day ebb to the south. Whichever direction the boat is facing depends on which of the two, current or wind, is strongest at the time. So over the course of a day the boat can swing around to all points of the compass. This can cause the lines to twist around one another even if care is taken to keep unwrapping them every day or so.

For a time this morning it seemed I might be forced to move MY boat because a fleet of semi-derelicts was drifting down towards me and the owner of the mess wasn’t around and calls to his phone went to voicemail. So I scooted up to the bow and started hauling in on the Danforth’s ⅜” line. The Danforth is my secondary anchor. It wasn’t easy. When I got to the chain it seemed as if the anchor was snagged on something below. It wasn’t, but over months of being pushed and pulled in one direction and another the chain had been dragged around and become fouled on the stock and flukes. It was one large ball of galvanized metal weighing around 50 pounds. The flukes of the anchor were NOT dug into the sand and undoubtedly it was simply the sheer weight of the anchor and chain that were providing any holding power. For the uninitiated these are the parts of a Danforth anchor… 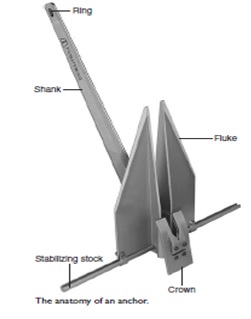 A younger person in better health might not have been too fazed at this. But I’ll be 78 in just over a month and I have serious issues with COPD. This was going to be a challenge. One thing I HAVE LEARNED with age is to not simply plunge into something like this. So I sat there looking at this galvanized lump swinging just above the water and thought about every step I needed to take to achieve my goal. . . I cut the nylon line where it was attached to the chain through a clevis. I led the bitter end of the rode behind the pulpit railings so I could raise the anchor up on to the deck more close to amidship and left the bitter end dangling over the side.

In the dinghy I pulled myself hand over hand to where the end of the line was hanging over the side. I tied it through the clevis at the head of the stock and then went back aboard. At the bow again I let the chain that was gathered on deck fall into the water and, after a mighty heave to bring the big anchor on board, I retrieved all of the chain. It’s done it’s job. After nearly three years being submerged in salt water some of the links are perhaps only half their thickness.Time to bring it to shore.

I put an anchor bend on the clevis and for now will keep the big Danforth on deck ready to be deployed in an emergency. The Manson Boss anchors have a good record for resetting themselves if pulled out of position. But I’m anchored in good sand and mud where I am. It’s shallow, too. Often at real low tides I’ve been aground without even knowing it until I looked over the side. I’m still good here even with one anchor on the bottom.