I often write about how I’m confined on my boat anchored here at the lower end of Anna Maria Island, Florida, because high winds prevent me from being able to paddle my dinghy the 130 yards to the boat ramp dock…

But then there are beautiful days like today. There’s a pretty blue sky filled with puffy white clouds and hardly a breath of air. I’m not leaving the boat simply because there’s no reason to. I have food, water and there’s a plague still raging on the land. I’m content being where I am…So I’ll just sit here picking at my ukulele from time to time and arguing with people I don’t know about politics on Facebook.

Tagged as boating, Living on the hook, Retirement

It’s nice to sit down to lunch and bask in the feeling that you actually got something important taken care of in the morning other than arguing politics with people you don’t know on Facebook.

When I’m going to be sedentary, like I have been over the winter anchored here at the lower end of Anna Maria Island, Florida, I like to employ two anchors. I set my 25 lb Manson Boss anchor and its 25 feet of 5/16” chain and ½” nylon rode out to take the weather coming from the south. The 25 lb Danforth with its 25 feet of 1/4” chain and ⅜” nylon rode was deployed to the north to handle weather from that direction.

It all worked as it was supposed to through the winter months, but for the past month or two I’ve noticed that the Danforth’s line has been more or less lying parallel to the Manson’s line. But when I’d pull on it from the bow it appeared as if the two were at a decent angle to provide good holding from storms coming in from the north or south. In addition to the wind blowing the boat in one direction of another the tidal currents flood twice a day towards the north and twice a day ebb to the south. Whichever direction the boat is facing depends on which of the two, current or wind, is strongest at the time. So over the course of a day the boat can swing around to all points of the compass. This can cause the lines to twist around one another even if care is taken to keep unwrapping them every day or so.

For a time this morning it seemed I might be forced to move MY boat because a fleet of semi-derelicts was drifting down towards me and the owner of the mess wasn’t around and calls to his phone went to voicemail. So I scooted up to the bow and started hauling in on the Danforth’s ⅜” line. The Danforth is my secondary anchor. It wasn’t easy. When I got to the chain it seemed as if the anchor was snagged on something below. It wasn’t, but over months of being pushed and pulled in one direction and another the chain had been dragged around and become fouled on the stock and flukes. It was one large ball of galvanized metal weighing around 50 pounds. The flukes of the anchor were NOT dug into the sand and undoubtedly it was simply the sheer weight of the anchor and chain that were providing any holding power. For the uninitiated these are the parts of a Danforth anchor…

A younger person in better health might not have been too fazed at this. But I’ll be 78 in just over a month and I have serious issues with COPD. This was going to be a challenge. One thing I HAVE LEARNED with age is to not simply plunge into something like this. So I sat there looking at this galvanized lump swinging just above the water and thought about every step I needed to take to achieve my goal. . . I cut the nylon line where it was attached to the chain through a clevis. I led the bitter end of the rode behind the pulpit railings so I could raise the anchor up on to the deck more close to amidship and left the bitter end dangling over the side.

In the dinghy I pulled myself hand over hand to where the end of the line was hanging over the side. I tied it through the clevis at the head of the stock and then went back aboard. At the bow again I let the chain that was gathered on deck fall into the water and, after a mighty heave to bring the big anchor on board, I retrieved all of the chain. It’s done it’s job. After nearly three years being submerged in salt water some of the links are perhaps only half their thickness.Time to bring it to shore.

I put an anchor bend on the clevis and for now will keep the big Danforth on deck ready to be deployed in an emergency. The Manson Boss anchors have a good record for resetting themselves if pulled out of position. But I’m anchored in good sand and mud where I am. It’s shallow, too. Often at real low tides I’ve been aground without even knowing it until I looked over the side. I’m still good here even with one anchor on the bottom.

Third blustery, windy day in a row anchored at the southern end of Anna Maria Island, Florida Thankfully I have water on board and enough food for several days. It’s been a week since I did any grocery shopping, though.

Two days ago I had to get towed out to the boat. I’d gone ashore to the hardware store to buy some fiberglass resin to make repairs to my shopping cart. I bought it last September because it was supposed to be aluminum. Maybe some part is, but I don’t know which. Overall I’ve been satisfied with it. It’s the fourth cart I’ve had in three years. The others rusted out fast and literally collapsed. This one had the wheels fall off on a trip one time but the Chinese company that makes the carts sent me replacement parts for free. It did take a couple of weeks to get the though.

Trying to stop the cart from rusting out I’ve been keeping it encased in a heavy-duty construction-grade plastic trash bag. I have to keep it in the dinghy, after all, because there’s no room for it on the boat. Not completely successful but it has slowed the deterioration down some. Not entirely, though. There’s lots of rust all over. On my last trip to Publix, last week, lifting it onto the trolley I felt something give way. On inspection back at the boat I found there are several rust-through spots as you can see.

The wind was a bit blustery and gusting into the teens but it was blowing directly from the east; ninety degrees across the path to the dock. I paddled ashore to go to the hardware store and buy some polyester resin to make some fiberglass repairs to the holes while adding strength. I already had matt and cloth in my tool locker.

The trolley is only running once an hour so, after the hardware excursion and a stop at Dollar Tree for junk food replenishment it was over two hours since I’d started. The wind had shifted into the NNE and increased to a steady mid-teens range.

I started paddling out to my boat about 100 yards away and struggled to get a third of the way when a strong gust pushed me back a good 15 to 20 yards despite my putting everything I had into fighting back. It was no use. So I quickly drifted back to the dock and waited. Perhaps a half hour later a pontoon boat came in to be recovered to its trailer. I asked if they would give an old man with COPD a hand and tow me out to my boat. They were understanding and a few minutes later I was tied off and back on board my boat.

I didn’t try and go ashore at all yesterday (May 13th) as it was blowing steadily in the mid teens. And I’m definitely not going anywhere today. I just took a reading on my handheld anemometer and got a gust of 24 mph!!!

Since I’m bouncing around on the waves, as you can see from the video, I can’t get up on the foredeck where I put the cart to repair it until things settle down some.

p.s. I just ordered an ALL ALUMINUM cart. Will be up to two weeks before it gets here.

The joys of living on the hook full time…I’m fine, thanks.

Comments Off on Another Blustery Day

Tagged as boating, Living on the hook, sailboats

The beached boat is finally gone after many unsuccessful attempts to free it from the oyster bar.

Months ago this boat, semi-derelict, was anchored up among the boats at the Bradenton Beach, Florida, anchorage. In a very violent storm it dragged anchor and came to lay against another anchored boat. In order to save himself and his boat, he person living on the anchored boat severed the yellow boat’s anchor lines and let it drift free. It came to rest on an oyster bar behind me. This all happened in the dark, so you can imagine how surprised I was when I woke up in the morning to discover this behind me. I have no idea how close it must have come to me as it passed by in the night. 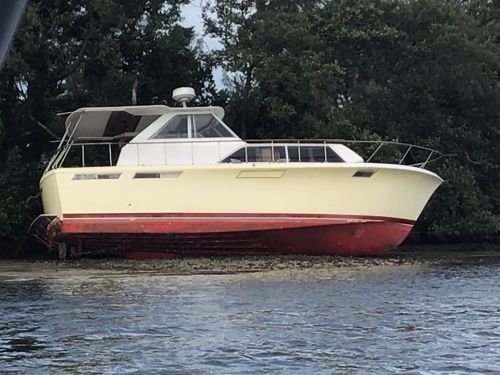 There have been many attempt to move it and all failed until this afternoon when a BoatUS tug started pulling on it. It wasn’t easy, believe me, but finally it started to move.

Three years ago, today, May, 3, 2017, I set out from Ft. Lauderdale, FL., on my little Venture22 sailboat and eventually ended up anchored at the southern end of Anna Maria Island over on the Gulf side of the peninsula.

The original destination was to be Breton Island, Louisiana, where I’d worked running a crew boat in the Kerr-McGee oil production field back in ’77/’78. I actually LIVED on the island for nearly a year…working 7 days on and 7 days at home.

Back then the island was about a half mile long and, perhaps, a quarter mile wide at its widest. But over the intervening years hurricanes had reduced it to a sand spit a couple of hundred yards long. I wanted to see it. 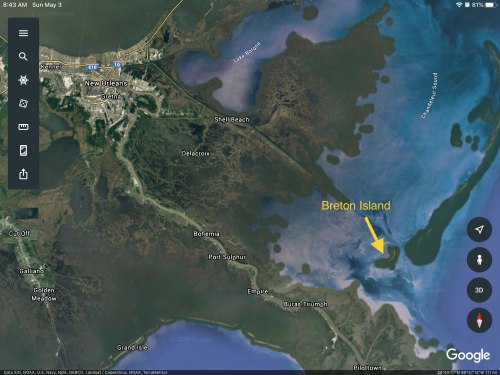 I made it as far as Carrabelle in the eastern panhandle of the state.That’s where, 18 miles off the coast, on July 6, 2017, a Coast Guard-dispatched boat took me aboard their boat and dropped me off at the dock in Panacea, Florida where an ambulance was waiting to take me to Tallahassee Memorial Hospital suffering from total kidney shutdown due to severe dehydration. I spent 17 days at TMH and Health South, a rehab facility, until I’d regained enough strength before returning to the boat to continue my voyage. I decided to head south. 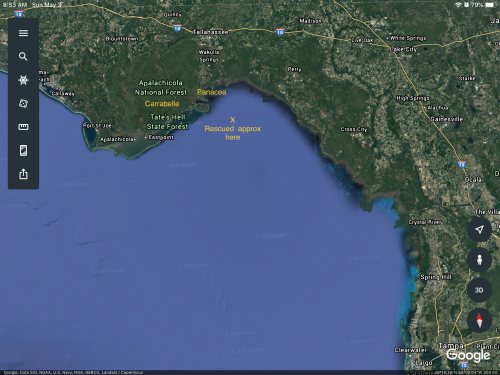 I made it to Bradenton Beach and Anna Maria Island where I’ve been ever since with one excursion, last year, to Cayo Costa to the south. About a 200 mile round trip.

Comments Off on A Journey Begun