It will be no surprise to anyone when I say I LOVE weird boats and the people who construct them. So Imagine how much I enjoyed seeing this boat drift into the Bradenton Beach, FL, anchorage this morning and beach out in front of the Bridge Tender Waterfront Bar. 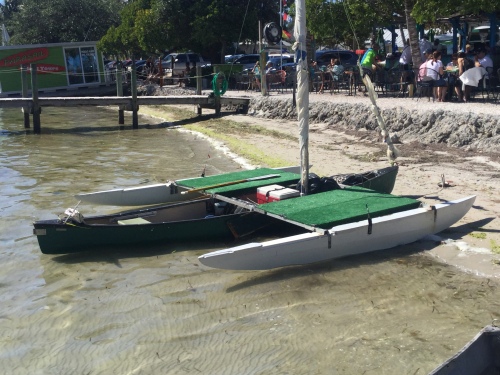 The owner’s name is Dean and he likes traveling around and poking into out of the way places with his canoe. But, he said, it was too unstable to allow him to go certain places. So, he took a Standup Paddleboard and but it in half along the centerline. Topped it off with some light plywood. The amas are held in place with construction extrusions and everything is put together with hurricane clips and wing nuts so it can be easily assembled and disassembled.The mast sail comes from a small day sailer. The jib is an old shower curtain and is self furling with a snap shackle fitting.

The lee boards were made from pine that he bought at Home Depot and glassed over. EVERYTHING was either scrounged, donated or came from a big box hardware store. He has a sleeping bag and a tarp to hide under when it rains. He spent the previous night anchored down in Sarasota Bay somewhere and was heading back there soon after we finished out conversation.

Never forget, whether you’re Dean on your cobbled together trimaran or a multi million dollar yacht the sunset’s exactly the same…

Oh, and as far as I’m concerned the crowning touch is the little mermaid figurehead!

When I bought my boat nearly two years ago and took off on my ill-fated journey that ended up at Tallahassee Memorial Hospital I had no dinghy.A dinghy didn’t become essential until I got to Bradenton Beach, FL, anchorage. Then I bought a cockleshell piece of junk for $150. It’s ugly as sin, needs to have gunwales installed and a bunch of other things, but all in all it has served me well.

One of the problems the dinghy had was what serves as a seat in the bow was separating from the hull on the port side. It has bugged me for ages but I just let it go. A month or so ago when I went out to buy some new shoes I found myself not too far from West Marine so I went there and bought some Six10 thickened epoxy adhesive.

I’m a big fan of thickened epoxy. When my friend Stephen and I had a marine repair business in Fort Lauderdale decades ago we used a LOT of the stuff in rebuilding things like sport fishing boat cockpit decks. Stef had the West System Epoxy pump system that automatically mixed the proper 5:1 blend with the push of a lever. Add colloidal silica or micro fibers and go to town with the stuff. But buying the individual chemicals and glop to do a small job was not worth spending the money…epoxy, hardener, thickener. I’d seen the Six10 in the West online catalog and it was an all-in-one tube you use with a caulking gun. I sprung for the $26 and bought some and an extra couple of nozzles because the job of repairing the dinghy wasn’t going to use all of it.

Those nozzles are pretty ingenious. As you look at one it has lots of little chambers along the way. The tube is divided into two parts: epoxy and hardener. They get mixed as the goo is squeezed out of the tube. The chambers (19 of them) shift the resin and the hardener from one side to the other to combine the two.

As you can see it’s a pretty big gap that needs to be filled. A quarter of an inch, at least. Because of the location how do I get the seat and the side of the boat to hold together close enough while the epoxy is hardening…Five hours according to the instructions on the tube? Obviously I don’t have clamps big enough to do the job.

The solution was pretty easy. I had a bunch of #8 machine screws, nuts, and flat washers. I drilled through the seat flange and the hull and then stuck the bolt through.Squirted the epoxy down into the gap and tightened the nut and bolt until the epoxy started to be squeezed out. Tightened JUST ENOUGH for the stuff to be compressed and stopped. There’s still a good-size gap, but the integrity of the hull will be strengthened when the epoxy “kicks off.”

One of the biggest errors amateurs make when using caulking or, in this case gap-filling, is that people put a nice, thick layer of caulking around something and then they tighten the screws, or bolts, down till they’re completely tightened thus squeezing 99.8% of the caulk out and leaving a paper thin layer of goop. Then they wonder why it still leaks. You need to put that caulk down and tighten it up JUST ENOUGH to have the caulking ooze out around the lip of whatever’s being bedded and then STOP!!! Let is sit for a couple or three days until it’s cured THEN go back and tighten the screws or bolts as tight as they’ll go. You’ve created a gasket now and it WON’T leak. 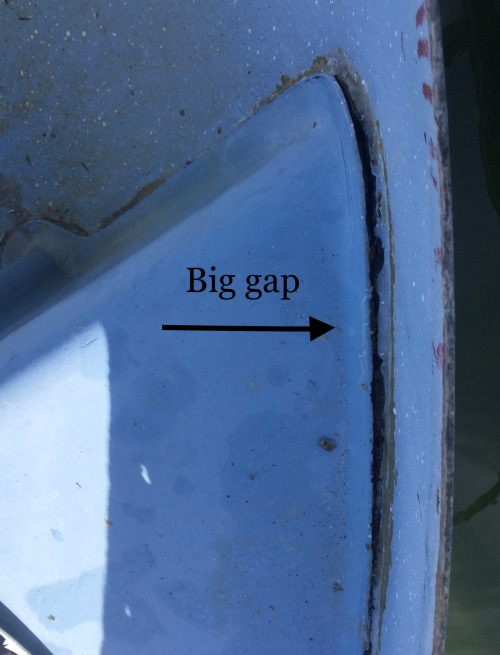 Comments Off on Dinghy Repairs

Sooner or later it happens to us all. We DIE! No escape. No bargaining. Kaput. It’s over.

I’m not going to get into a philosophical discussion about heaven and hell or gods which, for the record, I believe are all male bovine excrement. NO, I mean what happens after your carcass is cold and immobile…??

Burial never appealed to me. It’s creepy when you consider cemeteries: all those people in boxes, six feet under, the dirt, all facing towards the rising sun. Nah, never wanted that.

When my mom died she did something that blew me away. My brothers Jimmy and Howard, both dying in infancy from viral pneumonia, were buried in my dad’s family plot in Woburn, Massachusetts. Mom’s family were planted in Westminster, Mass. She had herself cremated and part of her was laid to rest with the boys in Woburn and the rest in Westminster. How cool was that??? She was also ahead of her time. When Jimmy died, around 1945, despite her grief, she thought of others and donated his corneas so someone else might see! Because of this I’ve had “Organ Donor” on my driver’s licenses, both here in the states and in the Republic of Panama for years.

My dad was also cremated. Some of the ashes were scattered off the Venice, Florida, Inlet. He and mom lived there for years and she LOVED to fish, so the inlet had special meaning. Most of his ashes were interred in Woburn with his family. My brothers, David, Mark, Jeff, and I were each given small Ziplock͢™ bag with some of his ashes. We drove out to Westminster and scattered them on our mother’s grave so they were together again.

I’ve always wanted to be cremated and have my ashes scattered in the Gulf Stream off of Fort Lauderdale, FL. Symbolic in a way. I spent about 36 years of my life, off and on, in Lauderdale. I could envision my ashes drifting up the eastern seaboard that I’d traversed many times in a boat. Perhaps some tiny molecule would make it all the way over to England from whence both of my ancestral families came back in the 1630s.

I’ve read stories about people having their ashes put in bottles and thrown in the sea and the people who find them years later and miles away. Always thought that would be a cool way to go.

I even have a playlist of songs I want played as my ashes are scattered and Amazing Grace ISN’T one of them. No, I’d like:

I’m makin’ you click on ‘em to find out what the messages are…and they ARE messages.

Planning for the future has never been one of my strong points. That’s why I’ve ended up living on a small sailboat at anchor and depending totally on Social Security to survive. Like most people, I suppose, I never spent much time thinking about what would happen when my cold, lifeless corpse was discovered. I’d become someone else’s problem. After all, I’D be dead, and the dead don’t seem to care much about anything.

I’ve known about the Neptune Society for years. They do cremations and ocean scattering. But while they’re less expensive than regular funerals they still cost a couple of grand. I don’t have that much set aside and it’s not right to lay that tab on my brothers.

Is there an answer? Well, yes. A little while back I came across a link to Medcure.org. It’s a “whole body” donation program in which you donate your remains to medical science. ALL expenses are taken care of including cremation and, as they mention on their site, scattering ashes at sea.