Take this past week, for instance. This was the 249th anniversary of the founding of the little town of Boquerón, and they were making a huge deal out of it.

The festivities started off on Wednesday. Around noon the first of the parade started by my house. Several of my neighbors from the old house came by with stools to sit on my porch and watch. It was the best parade they’ve had here in Boquerón in the five plus years I’ve lived here. This time there were a lot of floats and this time a lot of thought, care and originality was evidenced in them.

The first actual band that came by and even stopped in front of my house was from Colegio Daniel Octavio Crespo in nearby Concepcion. Most of what passes for marching music here in Panama are simply drums and once in a great while there will be a glockenspiel. It seems that Panamanians love pounding on things with sticks. But here we had an actual BAND complete with clarinets, saxophones and one lonely flute.

I used to play flute when I was in high school. Me and my four brothers were REQUIRED to take music lessons. About 6 years ago I bought a flute down here in David (dah VEED) but as my COPD developed I lost interest in trying to use an instrument I had to blow into and it has remained unused for the last three or four years. I put it up for sale at about half the price I paid for it on a local buy/sell Facebook site and got absolutely ZERO responses even after it had been posted and bumped up several times.

Looking at that lone flute in the Crespo band gave me an idea. I went inside and grabbed the flute and then went to the band’s director and gave it to him and told him to make sure some kid who couldn’t afford to buy an instrument for themselves got it. His thanks were profuse and he had his assistant take a photo of us and the flute together. Who knows, I might have changed some kids whole life by giving that flute away.

That night at the covered basketball court about 100 yards from my house the very popular Manuel “Nenito” Vargas and Las Plumas Negros (The Black Feathers) was playing. I went up and watched for about an hour and then returned home, stuck some plugs in my ears and went to sleep.

Thursday was sort of a rest-up day to prepare for the weekend. Now here’s where it gets bad. After a night time parade filled with drum and bugle bands some asshole with a van full of speakers opened the van’s back doors and started playing music with such volume and with such wide open bass that everything in my house shook and vibrated. The ear plugs helped only a tiny bit but there’s nothing you can do about the bass. This FUCKING LASTED UNTIL 3:30 IN THE MORNING!!! And it isn’t even really music. There’s NO MELODY involved. No one can dance to this shit! It is, pure and simple, JUST NOISE and it seems that the majority of Panamanians LOVE IT!

If you want to be a mindless, uncaring, self-centered piece of shit, I say, go park you van in front of YOUR HOUSE and play like that.

Then comes Saturday night. Some idiotic twatwaffle with a car full of speakers parked on the same corner and started the same shit again. But then it got EVEN WORSE. Directly across the street came THREE CARS AND A VAN loaded with speakers and each one seemed to be in competition as to who could be the most obnoxious asshole in the bunch. Literally everything in my house was vibrating.

I couldn’t stand it and so I threw my iPad and my telephone that holds my audio books into my knapsack and locked the house. A cab passed by in less than a minute and took me down to El Cruce where I caught a bus into the city less than five minutes later and went to my harbor of refuge over the years, Bambu Hostel where I was able to get a bed for $11 for the night. This is where I slept. 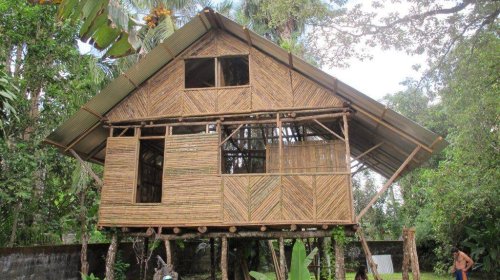 I woke up at 6:30, which is actually about an hour and a half later than I normally get up. Walked the couple of blocks to the bus stop and hopped on the bus that dropped me off, literally, at my doorstep.

A nearby neighbor stopped by on his way to the little tienda and told me the stupid assholes didn’t stop the noise until FIVE FUCKING THIRTY this morning!!! It was worth the 50 cents for the ride to El Cruce, the $11 for the bed, the buck for the frosty bottle of Balboa and the $1.20 round trip bus ride. Plus instead of being blasted by the morons with their car loads of speakers, I spent a couple of hours talking to a couple from France and an American who has lived in Sweden for the last 15 years and who, with his girlfriend has been riding their bicycles from Mexico City and are on their way to Panama as I’m writing this.

Some Panamanians will ask if the loud music like these assholes play and everyone else endures doesn’t happen in the United States. The answer is, NO IT DOESN’T! And there are reasons for it. There are noise laws everywhere in the States and the police will come and shut things down if there are complaints. Nothing like that happens here. All of this went on within ONE BLOCK of the police station.

Another reason it doesn’t happen is because if it’s NOT shut down some pissed of person with a FUCKING GUN will come out and shoot up the speakers and then will shoot the assholes who are responsible. That’s the ONLY TIME I condone gun violence.

Anyway, the festival is over. The food stalls that surrounded the town park are being dismantled and tonight should be back to normal…At least I’m keeping my fingers crossed that it will…

It’s the rainy season here in Panama. In fact it’s been raining for the past couple of hours and the little indigenous kids who live up the hill aways from me are walking past the house from the elementary school down the hill from me. They rarely have umbrellas. They just slosh through the water either carrying their shoes of the shoes are tucked away in their ubiquitous back packs. The rain doesn’t seem to bother them. It’s part of life here on the isthmus.

Few places outside of Amazonia get more rainfall than here in Panama’s Chiriquí Province.  An average year in the provincial capitol of David (dah-VEED) will see 103.158 inches of the stuff fall. And David ISN’T the rainiest part of the province, either. Being mountainous there are dozens of microclimates and some areas have more rain than others.

Several years ago we had a devastating afternoon rainstorm that had the rivers rise so rapidly and so violently that they took out several bridges including one on the main national highway, the Inter Americana between David and Bugaba. At that time I wrote an article in my blog about how much rain that REALLY is. I can’t find it now and after a cursory look decided not to spend any more time on a search.

When meteorologists talk about “an inch of rain” what they mean is that an acre of land would be covered by one inch of rain. Got that?

Well, in the recent flooding in Louisiana parts of the state got over 24-inches of rain and there were spots that got over 30-inches. And they got it between the 8th of August and the 14th.

So how much water is that? Well some geniuses at CNN meteorologist Ryan Maue Louisiana got drenched with about 6.9 TRILLION GALLONS of !!!

To put it another way, that much rain would fill more than 10.4 million Olympic-size swimming pools.!

Comments Off on Rain Thoughts

My friend, Kris Cunningham, had a post this morning about skunks and bicyclists. She rides her bike all over the place, and her most epic journey was from here in Algarobbos, Chiriquí, to Ometepe Island in Nicaragua! She didn’t encounter any skunks along the route. But my mom did, once…

Where I grew up on Cape Cod, Orleans, we had plenty of skunks. They used to get under people’s houses, and if you don’t know this, when they mate they also spray, and while not sprayed directly on you the odor would seep into your clothes and you’d go to school smelling like skunk. But nobody every did anything other than sympathize with you because everyone knew it was only a matter of time before they’d be reeking, too.

It must have been 1959 when this happened. I remember that we owned a 1957, blue and white Plymouth station wagon at the time. My mom was driving home one night from her monthly Eastern Star meeting. She was a Past Matron and a state officer. At the intersection of West Road and Skaket Road she met a skunk crossing the road. (Why did the skunk cross the road? Who knows?) Instead of running the damned thing over she came to a screeching halt inches from the probably petrified critter which promptly turned around, mooned the car and let loose a blast of its juice right straight into the hot radiator. 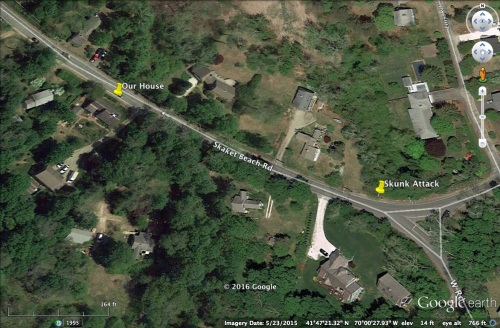 Supposedly if you’ve been sprayed by a skunk you can decontaminate yourself by washing with tomato juice. While that may work on humans or pets, it’s NOT going to get into all those little spaces of a car’s radiator. The smell lingered for a couple of months.

It wasn’t noticeable after a couple of days when the car was sitting idle in the driveway, but as the radiator warmed up with use the smell wafted through the air. When my mom would be coming down to what we called “The Stand,” our restaurant on the beach on the opposite side of town from our house, when she’d be coming into the beach parking lot down by the toll booth you’d always hear one of the counter girls say, “Here comes Mrs. Philbrick.” You could smell the car a hundred yards away. 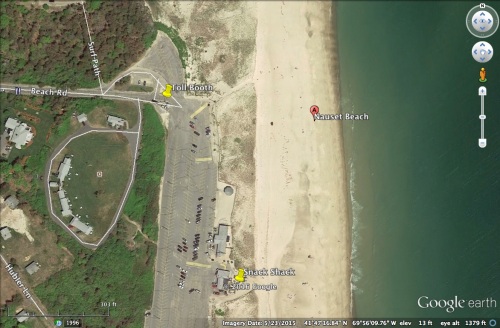