Today is the 10th Annual Gary Philbrick Memorial Scholarship Tournament. Back in 2012 I wrote this and I don’t know how I could improve on it…

My Heart Is On Cape Cod Today…

Today is the 8th Annual Gary Philbrick Memorial Scholarship Golf Tournament being held at the Olde Barnstable Fairgrounds Golf Course in Marston Mills on Cape Cod. It’s going to be a good day for a golf tournament. The forecast is for a sunny but windy day with a high of around 77°F.

Gary Philbrick was the pro at the course from the day it opened until his life was cut short at the age of 55 after losing his battle with cancer in 2005. He was also my brother and I miss him.

Gary was the middle brother of a brood of seven boys. He was one of those rare people for whom it would be difficult to find someone who would have anything bad to say about him. He was really a “people person.”

Gary loved sports from an early age and he was good at them. He was an All-Star Little League catcher and excelled at tennis in high school but his real love was golf.

He went to a small college in Ohio for part of a semester when he got out of high school. As he told it, he and some friends went out one night and really tied one on. He said, “it was the weirdest thing. I blacked out, and when I woke up I was in a rubber room and dad was looking at me through a tiny window. I thought it was some kind of a dream but it was all too real. I’d been expelled and on the whole ride from Ohio to Orleans dad didn’t say a single word. It was a very long ride. For the next couple of weeks every time I’d come down for breakfast, mom would burst into tears. After a couple of weeks they sat me down at the kitchen table and said, ‘well, now that you’ve ruined your life and embarrassed us so we can never face our friends again, what to you intend on doing?’”

“Play golf,” was his answer and that’s what he did.

He apprenticed at a country club in Connecticut in the summers and came down to Florida in the winters in the late ’60s to attend the PGA school. He and I also caddied together in several of the LPGA tournaments back then. Let me tell you, those ladies bags are heavy.

When he received his PGA club pro membership he returned to the Cape and was the pro at the Dunphy’s Resort Hotel and golf course in Hyannis where he reigned for a decade or so before taking over the Cranberry Valley course in Yarmouth for several years. He then became the first pro at the Olde Barnstable Fairgrounds course.

He was the Vice President of the New England Professional Golfers Association from 1992-96, President of the Cape Cod Chapter of the N.E.P.G.A. in 1984, ’85 and ’87. He was the director of the Doreen Grace Fund Golf Tournament for the Foundation of Brain Injury Research 1985-94. and on the Board of the Cape Cod Golf Association. He received several awards including Golf Professional of the Year in 1993 and 1996 and the National Golf Founders Achievement Award in 1993, ’94 and ’95. In 2002 he was awarded the prestigious Bill Strausbaugh Club Relations Award by the New England Section, PGA, “For Untiring and Distinguished Service to Golf Facilties and to Fellow PGA Members in the Field of Employment and Club Relations.”

He met, and married a young nurse who worked at the Cape Cod Hospital in Hyannis, Dianne Ruest.

They had three great kids, Ian, Lindsay and Tracy. I’d say they were great kids even if they weren’t my nieces and nephew. They inherited all the best traits of their parents.

Gary was a great father. I don’t know what his parenting techniques were, but I vividly remember an incident from a family reunion years ago. We were at the dinner table. Gary was sitting at the head of the table. I was to his left and Tracy, the youngest, then about five years old, was on his right. Tracy got a little fussy about something. I don’t think anyone else noticed it. I don’t remember what it was she did or said but I do remember that Gary quietly said, simply, “Remember what we talked about.” And that ended it.

He and Dianne loved to dance. They took ballroom classes and one room of their house was cleared of furniture so they could spend evenings dancing together.

If there was any doubt how popular Gary was it was dispelled at his wake. On a bitterly cold February evening hundreds, literally hundreds, of people stood shivering in a line outside the funeral home before they could get inside to pay their respects. And golfers still come to his resting place and leave signed golf balls in a hat beside his marker.

The 2005 Cape Cod Open was dedicated to his memory and each year there’s fierce competition at the Open to win the coveted Gary Philbrick Trophy for low-scoring professional golfer.

The Gary Philbrick Memorial Scholarship was established to assist college students who wish to have a career on the links.

Gary Philbrick was my brother. I was always proud of him and I miss him very much, especially today.

It’s been a long time since I posted a music video. This evening I was watching Orange Is The New Black on Netflix when they featured a song by one of my favorite singers…

Comments Off on Just Passin’ Through

One of the neatest things about having a blog is finding out that people actually read the damned thing and a quite a few of them take the time to write a comment. Recently Michael Bowman commented on my Budget Houseboating blog that he was building a shanty boat for use on the St. John’s River in northern Florida.

Michael has modified Phil Thiel’s “Escargot,” a design I always admired myself.

We started exchanging emails and he wrote:

Talisa (Creek Indian word for “Beautiful Waters”) was designed with Plil Thiel’s ‘Escargot’ as the idea. I had to have some standing headroom somewhere and more than 2′ width to sleep. I added a foot to the beam and 18″ to the main cabin’s headroom.  The rest has just been sweat and $$. It has been a WONDERFUL experience and I’m heading towards a charter “business”. 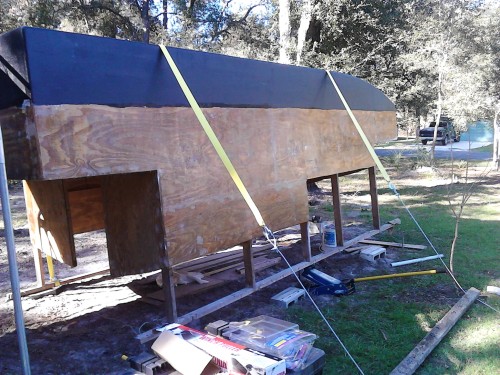 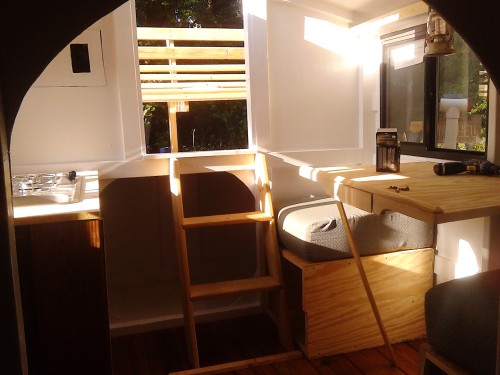 Just a couple of days ago Talisa was “splashed” in the St. John’s and Michael reports that she handles “beautifully.” 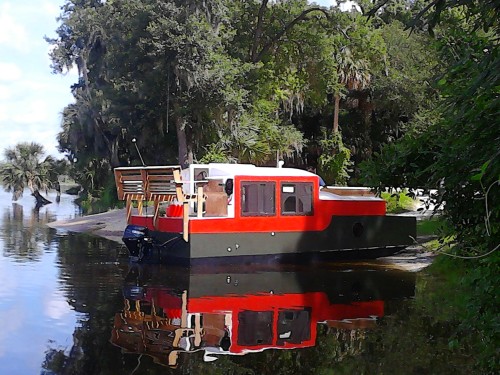 For those of you who are unfamiliar with the St. John’s, at 310 miles, it is the longest river in the State of Florida. Most of it is scenic and much of it is in its natural state. When my mom died, my dad took their two mutts, got on his 26′ Stamas in Venice, FL and disappeared. Six months later we found out he’d voyaged across the state and up into the St. John’s where he mourned the loss of his wife, his companion and his partner.

You can charter Michael’s boat, starting in October, and find out why the St. John’s had the ability to sooth my father’s soul and may just give you some great memories for your life. Contact him at: rajahcat1@gmail.com.

In a recent post (https://onemoregoodadventure.com/2014/06/26/what-this-spot-for-future-developments/) I was ruminating about the possibility of building a scow-hulled shanty boat in modules, transporting them across the Isthmus and assembling them into a single entity rather than trying to build it all in one huge piece. I mean, they build aircraft carriers and huge ocean liners in pieces and put those together, why not something like a home-built shanty?

Well, I was surprised when this turned up in the comments section:

That turning over issue ….we had that too , and I built in ” modules ” too , then glued and bolted the whole mess together .You can see photos here :

regards , Trish and Harry in OZ

Unfortunately flickr won’t let me save a photo so I can post it here as a teaser, but I’ll tell you straight out, if the idea of having a houseboat/shanty boat intrigues you you REALLY need to click on the flickr link. There are a ton of pics and these people are going to have a great place to relax. This is a pic they sent me of where they intend to use the boat.

Comments Off on It’s Been Done

George (Putting the W into AWOL) Bush Was An IDIOT…

Yes, I am unaplogetically liberal, and if you don’t like it, bite me…And don’t forget, you can write comments telling me I’m wrong, but it’s MY BLOG and they’ll never see the light of day. The First Amendment doesn’t apply here. It only means the government won’t put you in jail for what you say. It DOESN’T absolve you of the fate of me telling you you’re a twatwaffle for your beliefs.