I have been horribly neglectful in maintaining this blog. Last post was back around April. It isn’t that I haven’t been writing about what’s been happening, I simply have been posting on, gasp, shame, Facebook instead of here.

It would be impossible to explain all that’s happened since the last post so I’ll try and do it succinctly.

Because of deteriorating health problems with my COPD and the fact that Medicare doesn’t pay a penny once you step outside the boundaries of the country I was forced to leave my beloved Boquerón, Chiriqui, Panama and repatriate last April.

The only way I could afford to live in the states just having Social Security to depend was to buy a boa. It’s a small one, a Venture 22, and after fitting it out with my friend Stephen, I left Fort Lauderdale and headed north on the Intracoastal Waterway giving the Tangerine Twatwaffle’s Mar a Lago the finger as I passed.

The boat came with a 25hp Yamaha outboard. It was just all wrong for this boat. Over powered, overly heavy and the damned thing quit on me three times between Fort Lauderdale and Stuart. While there I exchanged it for a 9.9 Mercury which is the max recommended for the boat. Never a moment’s problem with it. It took me across the Okeechobee Waterway to the Gulf of Mexico and then all the way up into the panhandle of the state to Carrabelle. I had been planning on going all the way to Louisiana to look at what little was left of Breton Island where I’d run crew boats in the Kerr-McGee oil production field for a couple of years. With all the hurricanes since 1978 what was once an island about a half mile long and a couple of hundred yards wide where we actually lived at night has been reduced to a couple of hundred square yards total. I just wanted to see it once more.

But the dream died in Carrabelle. I’d had a complete loss of appetite for a couple of weeks. It wasn’t that I was sickly. I just lost interest in eating. I collapsed in the office of the marina there on the 4th of July. On the 5th I departed and headed toward Bradenton Beach, a few miles below Tampa Bay. I knew a couple of people there; a lady I’d met in Panama and her sons. I thought I’d go there to spend the winter months.

Some 15 miles out in the Gulf at about 2 a.m. I could barely breath and was unable to sit up. I dug out my little 6-watt handheld VHF radio and called “Mayday, mayday, mayday.” The Coast Guard station in Mobile, Alabama, heard my call and after determining my GPS position they sent a boat that evacuated me to shore where an ambulance waited and took me to Tallahassee Memorial Hospital. I’d planned on having a nice lobster dinner for my 75th birthday on the 9th but ended up eating hospital fare instead.

In all I spent 17 days in either Tallahassee Memorial or Health South Rehab Hospital before getting back on my boat which had been towed into Panacea harbor and heading down to Bradenton Beach.

I’d been in Bradenton Beach for about a month when I developed severe chest pains. Not a heart attack, wrong side of the chest and having already HAD a heart attack it wasn’t the same kind of pain. I got myself ashore, got a cab and went to Blake’s emergency room where I was admitted for a four-day stay. Underwent several CAT scans, ultra sounds, X-rays and an endoscopy to discover I had a “very large” duodenal ulcer. Meds have brought that under control.

A month and a half ago my new doctor gave me a sample of something called Breo Ellipta for my breathing. This is a totally unsolicited endorsement of the product. It has literally changed the quality of my life for the better.

It’s expensive even after my insurance discount (I’ll pay $265 a month until my med costs have reached $600 then I can apply to the manufacturer for help). It doesn’t stop me from getting short of breath but those times aren’t nearly as severe as without the Breo.

I still need the Ventolin inhaler but since starting on the Breo a month ago I’m using it A LOT LESS THAN BEFORE. I had been buying an inhaler about every two weeks. Today I stopped by the pharmacy and bought another one to have in reserve. My insurance knocked off a whopping $6 (welcome to America, Richard) off the cost so what cost me $9.35 over the counter in Panama is now costing me $53.01 here) BUT I still have 58 puffs left from the 200 each inhaler starts with AND the pharmacist checked and I bought this last one on November 23. A MONTH AGO!!

Let me fill you in on some of the places I stopped at on my cruise in no particular order: 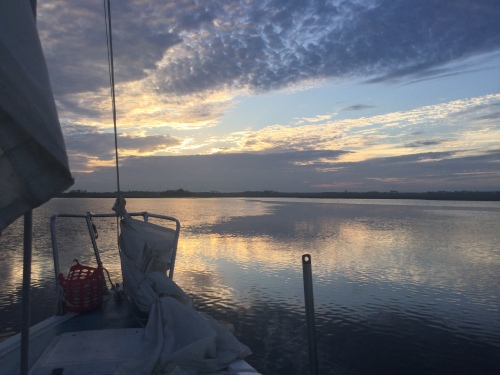 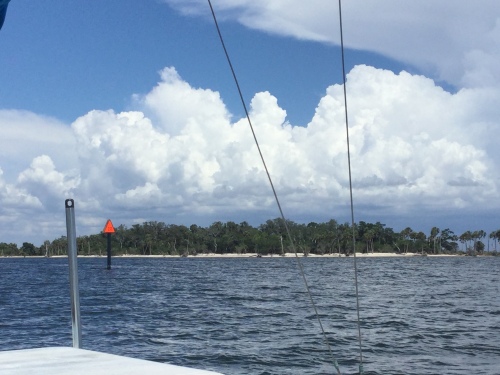 Then there was Hurricane Irma to contend with. Early on all of the “spaghetti” models, save one, had the storm tracking up the east coast of Florida. That one had it traveling right up here over Bradenton Beach! While everyone was saying it looked like we were going to be in the clear I kept saying, “You watch, that bitch is coming up the single, solitary path on all the forecasts. Guess who was right?!?

I struck the mast and then headed out of the anchorage as most of the boats did, but I went where none of the others did. I went across the ICW and under a little bridge and up a narrow canal. After the canal turned 90  degrees to the right I found another narrow canal that seemed like a good place to check out. It was so narrow in there that I’d be unable to turn around so I backed down into it. A couple of hundred yards in I found an indentation in the mangroves that lined both banks and headed into it. It was perfect! Two thirds of my port side was covered by thick mangroves and half of my starboard side was. Ahead of me was a jungle of trees and astern, across the sliver of canal there were three, two-story, cinder block houses and, more mangroves.

I got half a dozen lines into the trees and hunkered down for the storm. That was the worst of it. The anticipation. Then, two days after I secured myself the storm started picking up. The wind literally blew the water out of Tampa Bay, only a couple of miles north of me, and I ended up with 2/3rds of the boat sitting on the mucky bottom. Fortunately the Venture 22 has a swing keel and a flat bottom and will float in just a foot of water. I was actually looking UP at the ground level from my cockpit!

As the winds increased they simply blew right over my head. In fact, before the eye neared us I went to bed. In the morning the winds were replaced with rain and when I was able to stick my head out into the open I found that the worst thing I’d suffered from the hurricane was about a gazillion mangrove leaves covering nearly every inch of the deck. I stayed put for another day before returning back over to the anchorage. Some of the boats that hadn’t moved to safer shelter were still doing well, but looking around the whole anchorage area seven boats had sunk.

I decided to leave the mast down. In the several hundred miles I covered from Fort Lauderdale, across the state on the Okeechobee Waterway and then up to Carrabelle in the Panhandle and back down to Bradenton Beach I actually only sailed four times. The rest of the time it was a combination of things…too much wind, not enough wind, or the wind was coming from the wrong direction.

Having the mast lying down on deck as it was for the hurricane was unacceptable and a nuisance. So I made a “gallows” for it out of PVC piping. It now sits up in the air, low enough that I’d be able to get under any bridge with at least 10 vertical clearance and yet I can stand upright under it back by the tiller. It also makes a wonderful anchor for a tarp to protect the cockpit and over the hatchway. 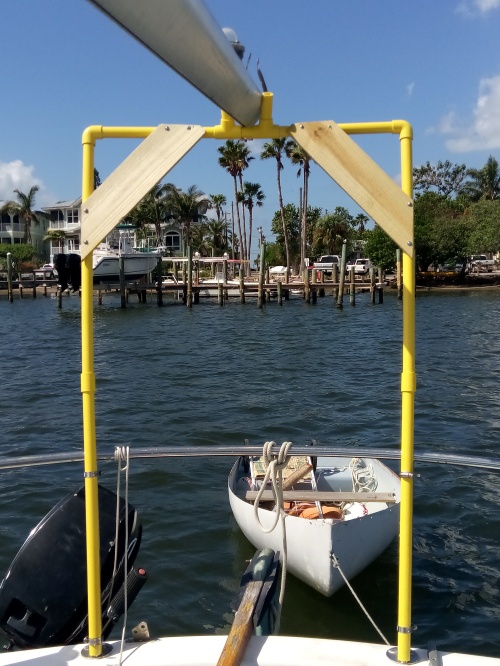 There have been some nice days here at the anchorage…

Some were downright scary!!! This is less than a quarter mile from where I’m anchored.

Well, that wraps it up. I’m not promising that I’ll be a LOT better than I have been, but I will be SOMEWHAT better.