One horrible omission I left out of what I consider to be essential equipment on any boat I own would be a depth finder. There are really two kinds. One simply tells you the depth under your keep. It is really the depth under the transducer (the thingy that sends out the sonar signals). You have to add the depth of the keel to that, or subtract, actually. The display unit is something like this… 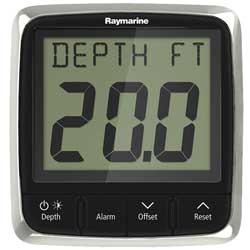 An alternative, and the one I prefer, I called a “Fishfinder.” These instruments display their information in a visual rather than just a simple digital display. While they will spot fish below the boat the reason I like these, and I had one on Nancy Dawson, is that they show you what the bottom looks like. You can see if the bottom is gradually sloping or if it’s a steep drop off, information I think is essential for the safe operation of your boat. Displays look like this… 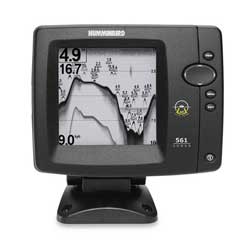 I don’t care about the fish. I usually drag a lure behind me and have snagged some really nice meals that way, but as far as “finding” fish is concerned I couldn’t care less.

And another important omission was that of a stove. How are you going to cook that damned fish you just caught, anyway?

Many boats that have stoves have alcohol stoves. These are supposed to be the “safest” but if the boat I buy has one it’s going on Craigslist immediately. The damned things have too many downsides to make them worth while. One is that alcohol for cooking is expensive, and it’s not that easily available in out of the way locations. Secondly they don’t cook worth a damn. I was making a delivery one time from New Jersey to Fort Lauderdale on a converted oyster dredger and it had an alcohol stove. It took nearly half an hour to boil a couple of cups of water so we could make coffee in the morning.

Of course electric ranges are out of the question. Propane gets a bad rap. It’s heavier than air and a leak means the gas will drop down into the lowest part of the vessel where it becomes an explosion hazard. Even so, it is probably the most efficient medium for cooking to be found. When I had my Kaiser 26 one of the first buys was a two-burner stove from an RV outlet. It used propane and when I was off on my nine-month cruise I had to 5-lb tanks. In that whole time I only used 15 lbs. When I got back to the States I bought a 20 lb. tank. To be safe, when I was finished cooking I’d turn the gas off at the tank letting what was left in the hose burn off and then I’d detach the hose from the stove. It may sound like a bit of a pain to do that, but all told it was probably less than two minutes out of my day and I can live with that.

There are plenty of camping stoves available at reasonable prices but most of the ones I’ve seen use those stupid little disposable gas canisters and I’m not going to tote a bunch of those around, and trying to locate a place that sells them when you’re running low is a hassle I don’t want to put up with. A 20-lb. tank, on the other hand, is easy to deal with. With so many barbecue unit sitting on decks all around the country that use those tanks you can pick up replacements at many gas stations and convenience stores.

And, of course, extremely important is ELECTRICITY! Sure, I’d love to have big solar panels and for a couple of hundred bucks you can get a fairly decent solid panel that should keep your batteries topped off. You have to figure out how much electricity you’re going to be using, though.

One of the first things to do is to convert your running lights to LEDs. They gobble up just a fraction of the power in your batteries. One of the biggest drains I had on Nancy Dawson were the incandescent running lights. They’d completely drain my batteries when I was sailing at night, and as a consequence I ran illegally dark most of the time, only turning on my lights when another vessel was in view so I could be seen. And an incandescent anchor light is a great power thief. That’s why I’d be using the Suaoki solar powered lights for both an anchor light and for interior lighting after dark.

There are some things that will draw directly from the battery bank…the VHF radio is one. It will be on all the time when underway. The depth finder also runs directly off of the batteries but it doesn’t need to be constantly running if you’re in the channels of the ICW. You just need to turn it on when trying to creep into a shallow anchorage.

What I really need power for is to charge my notebook computer, my tablet computer and my smartphone. The phone is also my entertainment device filled with audible books. All of these can be charged via an inverter, a device that turns the battery’s DC power into a simulation of AC power. A 1,000 watt inverter can also power small hand tools like sanders and saws.

When I was living on my Kaiser 26 I had a 1,000 watt Generac generator. It had a DC outlet to help charge the batteries, but I also had a car battery charger. That damned generator was LOUD! What I’d do when I was anchored somewhere was to fill the tank half way, start it up, hook the car battery charger to it and the bank and then I’d get in the dinghy and go exploring somewhere. By the time I got back the gas had run out, the generator was quiet and the battery bank was charged for the next two or three days. I’m not ruling that out as a possibility.

There’s probably other essentials I’ve forgotten but that’s it for today.