As you can see in earlier posts I set up a Go Fund Me campaign to see if I could get funding for an 0ff-the-wall idea of taking a small boat from Minneapolis to Mobile Alabama down the Mississippi and Tennessee Tombigbee Rivers. The very first donation was the incredible gift of A BOAT!

The donor, who lives in northern Vermont suggested that upon making a couple of modifications to the boat I should consider taking the Champlain Canal south to where it meets the Erie Canal and then proceed west to Buffalo. Capital idea! I did the Erie Canal from west to east back in ’74 and always said I’d do it again if I got the chance.

So, yesterday I was looking at Google Earth and wondered that I should do once I got to Buffalo. Getting someone to put my boat on a trailer and tow me to Minneapolis seems like the only way off getting there. BUT, it’s 725 miles as the proverbial crow flies, OR, 947 over the road. Whew! How much would that cost? More than I’d want to spend, I bet. 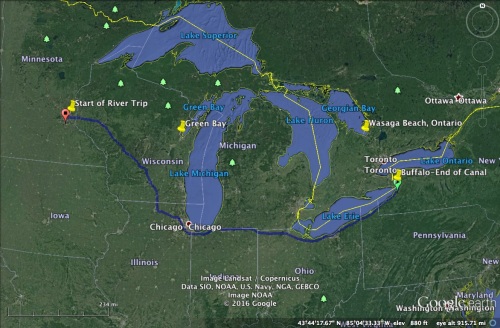 Then I’m thinking how close can I get to Minneapolis by water? I’d have to run the lengths of lakes Erie and Huron, nearly 800 miles. Been there, done that, don’t really want to do it again. Granted, when I ran Lake Erie in ’74 it was late in the season and it was rough. Move one day and then spend two or three days holed up somewhere waiting for the weather to moderate enough to move on. The run from Erie, PA to Buffalo, was in 6-foot following seas, and a 43-foot Hatteras Tri-cabin with a pair of 653 Jimmies is a REAL PIG in following seas. I can’t imagine doing Erie in a 19-foot boat and there are damned few places along it’s 300 mile south coast to pull into.

As I stared at the image of the Great Lakes I begin to focus in on the north, Canadian, side of Lake Huron and that area known as Georgian Bay and the North Channel. That area is well known as a great boating location since it’s relatively sheltered waters, lots of anchorages and beaches to pull up on, and I can run it all the way to the Mackinaw Straits, roughly 300 miles. That’s the length of Lake Erie, but MINUS the 325 miles or so it would take to traverse the length of Lake Huron. Going the Georgian Bay route eliminates all that.

Now how am I going to get from Buffalo to Wasaga Beach, Ontario a distance of 172 miles on the road? Well, one of the members of both my Facebook groups and one of my Facebook friends, just happens to LIVE in Wasaga Beach!!! Voilà! If Roy can’t do it, I’m sure he knows someone who has a trailer that could take my boat there. I’d pay expenses, of course. 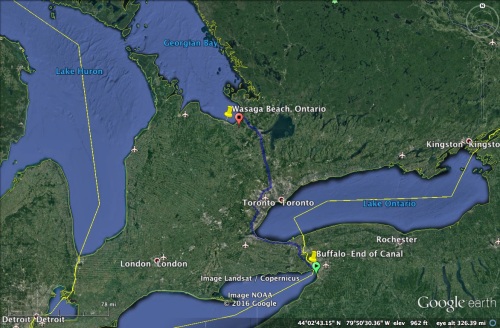 From the Straits to Green Bay would be island hopping down the east coast of lake Michigan with one long 35 mile (7-hour?) open water run that can me made with good weather. Then from the mouth of Green Bay down to the city of the Packers is about 85 miles. That leaves 261 miles to be towed to Minneapolis to start the river portion of the trip.

So, before starting out on the river portion of my odyssey I’m going to travel roughly 120 miles to get to the Erie Canal. Another 339 miles on the Canal itself. All together it would be roughly the same distance as being towed overland from Buffalo to Minneapolis. BUT the scenery and the experience would be lost.