I’m not going to try and edit this post. It’s a collection of things I’d written down when I was without an internet connection as a result of my recent move.

Well, the move is finished. Done. Complete. And let me tell you, so am I. I’m beat. Whipped. Done in. The last three days (Sat. Sun. Mon.) beat me up bad, and I had help with the heavy lifting every day. Today when I was at the old house wrapping things up I could only work for a few minutes at a time and then I had to rest before I could continue.

That was written Monday evening. A pickup taxi driver, Remiro, I’ve used several times before did all the heavy lifting for me for which I was very grateful, but everything is out of the old house and into the new.  Well, it’s not a house, really, but on of two apartments in a building that was once a set of offices for the Tribunal Electoral which has ceased to be here in Boquerón and moved all its functions over to Bugaba. But the place is half again as big as the house in La Barriada, and easily twice as big as the first house I was living in, here, since I basically lived on the first floor and almost never went upstairs.

Yesterday, Tuesday, I went into David to the Cable Onda office to switch my service to the new place. Piece of cake, and they’re supposed to come do it today, Wednesday. I don’t doubt that they will because this is the FOURTH time I’ve had to have installers come to the houses I’ve been living in and they’ve ALWAYS come.  When I have internet access I’ll feel like I’m truly moved in.

The cable office move went smoothly, and sure enough, the techs were at my house a little before noon and I was back on line in an hour.

Some big goings on over by the bank and the people must have started gather in around six. Right now there’s easily more than 100 people gathered under and around a large, I guess the only way to describe it would be the roof of a tent. I just asked an old guy walking by what was going on and all I could get out of him was that they were waiting for the bank to open. That’s part of the mystery. Yesterday a guy stopped and started talking to me about coming to the bank today and something about paying rent. Had no idea what it was all about. Still don’t.

People continue to arrive, on foot, by bus and in taxis. They’ve just started letting a few people in. There are Europeans and indigenous all together.

Okay, finally two passersby explained what’s going on at the bank. There is a program in Panama that I’ll look up later called ciento para septenta. 100 for over 70. A supplemental give away of $100 to people over 70. That explains all the canes and walkers. We chatted for a couple of minutes and as they left I heard one of them say, “He speaks Spanish well.” If he only knew.

One of the street food vendors is open for business.

Last photo from La Barriada. Didn’t see a lot of this in the backyards of Fort Lauderdale…

This morning the old landlord stopped by the new digs. I was going to go to his house Saturday and give him the keys. I never told him I when I was going to move, I just did it. But this is a very small town so it probably didn’t take too much of an investigator’s job to find out where I was. My last electric bill at the old place was $9.54, and the one previous to that was $15 and change. I gave him a $20 and told him that would more than cover whatever I owed. The bill is in his name. Here at the new place it’s in my name. I did a perfunctory clean-up when I left, but with no water I was unable to mop the floors so I gave him another $20 and told him to get someone to do it. He’ll probably have his wife or daughter that lives there do it, but that’s fine with me.

La Barriada never felt like home, if you know what I mean, and I wondered if it ever would. I already feel more comfortable here in the new place. It’s fun sitting out on the front porch with my mug of coffee in the morning and watch people waiting to catch the bus to go to work. People passing by on the sidewalk always saying “Buenos dias” and of course I have to respond in kind.

Somewhere I’d written about the size of the house in La Barriada, but I can’t find it. It was small, anyway. This place is a lot larger. The living room is 15X19′ and the whole place is 15X56′. I’d say it’s at least 50% larger than La Barriada. The bedrooms are 12X12′ which is almost as large as the living room at La Barriada, and the kitchen has the largest counter space of any place I’ve live since leaving Potrerillos Arriba.

I’m sure it will take a while before this place feels like home, but I bet it won’t be too long.

Oh, and this is on the wall of an abandoned house across the street from my new landlord’s house. 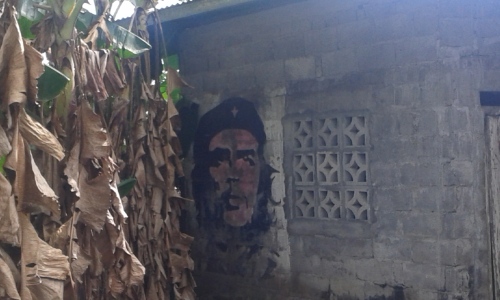