One of the things I brought with me from Fort Lauderdale when I moved to Panama was myYucatan hammock. Hammocks are everywhere here in Panama. There’s hardly a house or a yard that doesn’t have at least one. Nearly every store down at the bus terminal in David (dah VEED) has hammocks for sale. They are not the net style like the hammocks of the Yucatan but are a solid piece of heavy fabric instead. While I see hammocks everywhere here I don’t know if people actually use them to sleep in instead of on a mattress. When I was walking around Isla Mujeres years ago and peeking into people’s houses through their open front doors I saw quite a few hammocks strung between walls and it was obvious that people, mainly Mayans, used them as their beds. I’m pretty sure the indigenous Ngäbe-Buglé, Panama’s largest indigenous tribe and who live primarily here in Chiriquí and Bocas del Toro provinces, don’t sleep in them. I constantly see them loading really cheap foam mattresses onto buses at the terminal.

The wonderful house I house-sat in Potrerillos Arriba when I first came to Panama had widely spaced columns supporting the overhanging roof and they were perfectly spaced for hammocks. In fact, they had three or four of them; the fabric kind that are sold around here. They were okay but not nearly as comfortable as my Yucatan so I swapped out one of theirs for mine for the two six-month stints I lived there.

Since then I haven’t lived anywhere where I could sling my hammock, and I didn’t want to go drilling holes into somebody else’s concrete walls to install hooks to hang it. I had seen some free-standing hammock stands at a couple of stores in David,  but, as is normally the case here, when I went to buy one they were all gone and nobody knew if they were ever going to get any more. So I went online to see if there were any plans for building a stand of my own. Silly me, of course there were.

I could buy some 2X4s and build something like this:

Or get a little fancier and build one like this:

If I wanted to get really fancy I could try to make something like this: 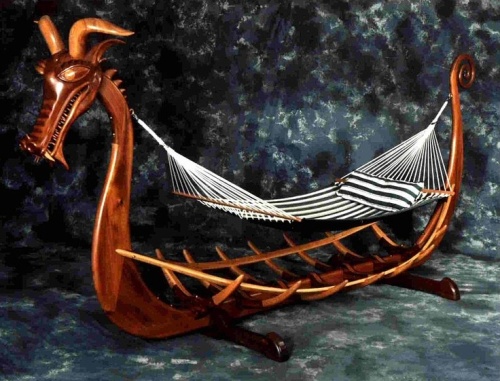 Uhmmmmm….probably a little bit beyond my capabilities…I’ll pass, but it WOULD be cool to have one like it, don’t ya think?

I saw a couple of plans for stands made out of galvanized pipe that wouldn’t be too hard to put together: 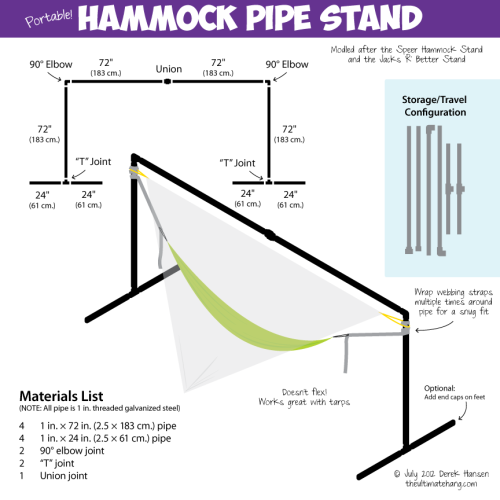 And then I stumbled across what is called a Turtle Dog Stand. Again, not so esthetically pleasing, but certainly something well within my capabilities to make.

It’s fairly light weight since it’s made with 2X2s, easily portable, and can be used outdoors:

Or set up indoors. No holes in the walls:

So, about a year ago, I went out and bought everything I needed to build one except for the connecting pole.

Then inertia set in and in the last year I’ve moved twice.

I’ve been sleeping on the air mattress I bought when the old landlords thought their sister was going to come down with them from Texas. She never did, and they never offered to pay me for it, so I figured it was mine! It’s been comfortable, but last week I heard a “POP“. when I was putting a little more air in it. It didn’t instantly deflate but while I put air in it before retiring for the night, by the time morning rolls around it’s probably lost half of the air.

Yesterday I went to the Panamanian equivalent of Lowe’s over in nearby Bugaba and bought a 10′ length of metal conduit. I wanted twelve feet, but they only sell it in 10 and 20 foot lengths. We’ll see if I can get away with the 10 footer. I didn’t want to have to throw away 8 feet of conduit if I didn’t have to.

Today I put it together. Took me a couple of hours because my COPD bothered me being bent over so much. But anyway, here it is.

I had to shorten it up a bit tying the ends to make it fit the 10 foot length but it’s fine. I’ll let you know how well I slept in it tomorrow.

Comments Off on Overcoming Inertia