Exactly a month ago I wrote about removing the old, frozen outboard motor bracket from the boat…  https://onemoregoodadventure.com/2019/10/01/the-cruising-life/. As of yesterday the new bracket is now sitting jauntily on the transom. It wasn’t easy!

You have to know a bit about me to understand how difficult the job was. I’m 77 years old. I operate on lungs with a bit less than 40% of capacity due to COPD. I have three arterial stents and my fingers are gnarled from arthritis. I live full time on a Venture22 sailboat anchored off of Coquina Beach, Anna Maria Island, Florida, a bit south of Tampa Bay. Most of my adult life I made my living on the water either operating boats or repairing the damned things.

I tried to install it a week or so earlier but couldn’t do it. I I thought if I could get one or two of the 5/16″ bolts through the holes it might hold up well enough until I could climb down under the port seat in the cockpit to get the nuts on. And I’m trying to do this in a dinghy! The damned thing is heavy at 20 lbs and wakes coming in from the nearby Intracoastal Waterway had me bouncing up and down. Kersploosh! One of the bolts drops off into Davy Jones’s locker. Certainly a pain, but from years in the business, even though there are only four holes to be filled I bought FIVE bolts.

This wasn’t going to work so I gave up for the time being. I made a couple of calls to guys I know who are anchored up above but got no reply. So I’m thinking over the next couple of days, “What would I do if I was off on some deserted island by myself? How would I be able to cope and get the job done?

I pondered for a couple of days and then it hit me. I’d been going at it from the wrong direction! If I had a bolt sticking OUT of the transom it should be easier to get one of the holes to slip over IT than to try and get a bolt to slip into what is a small, moving hole. In my container of assorted odds and ends I found a 3” long bolt and nut and a couple of fender washers. The strange thing I notice as I’m digging through the stuff is that I’ve got a good assortment of bolts but, oddly, very few nuts to fit anything.

So, I have to climb down under the portside cockpit seat and it’s not easy. For the benefit of those who didn’t read the previous post this is the challenge… 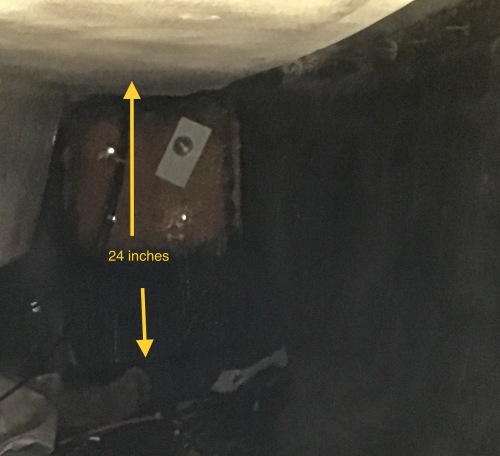 Best case scenario is that I’ll only have to do this three times. Did I tell you I still believe in Santa Clause and the Easter Bunny?

I toss the bolt back to the transom and dive into the hole head first and inchworm my way aft. Though it’s a bare 7 feet, a half century of inhaling the smoke of licit and illicit substances has taken its toll and I have to pause a couple of minutes until my breath returns to normal. Or a reasonable facsimile of normal, anyway. Struggle my way out of the hole, into the cabin and up into the cockpit where I have to rest up for a few minutes.

I then wrestled the 20 pound  bracket down into the dinghy and, hand over hand, pulled my way to the stern. I tied the bow and stern of the dinghy off to keep from moving around as much as possible and then tied a length of paracord to the bracket and secured it to the stern railing so that if I lost my grip on the thing it wouldn’t fall into the water.

I lift the bracket up to set it on the protruding bolt and it nearly slides back into the hole. I forgot to secure it with duct tape as I’d planned.

Unfasten the bracket. Back around to the side of the boat and up into the cockpit. Down into the cabin where I rest for a couple of minutes before plunging into the hole again. A couple of pieces of tape over the head of the bolt only take a couple of seconds. That done, it’s inch my way topside again and tie up astern once more. Resecure the bracket to the stern railing and lift the bracket up onto the bolt. Holding it in place with one hand I slide a fender washer over the bolt and finger tighten the nut to hold the bracket steady while I put the bolts into the upper and lower outboard holes of the bracket. The holes aren’t exactly lined up but a couple of light taps with the small hammer I’ve brought along takes care of that, and the bolts are head-deep in the holes.

The problem comes with the inboard bottom hole. The way the thing is built the bolt (yellow arrow) protrudes too far to allow the head of the bolt to pass by and enter the pre-drilled hole (red arrow).

Back into the boat cabin and dig out the cordless drill and a bit that will fit through the hole. I’ll drill all the way through the transom from the outside in the hole just above the intended one. It will be a pilot hole. Then, when I’m inside the hole again, with the proper sized bit, because that one won’t fit through the bracket hole, I’ll enlarge the hole until the bit bottoms out on the metal of the bracket.

Now I’m back in the hole for the THIRD TIME. Tighten the two lock tight bolts after fitting aluminum backing plates over the bolts and enlarge the new hole. I remove the tape from the pilot bolt and use some two-part epoxy stick putty to fill the hole that’s useless.

DONE!! It looks cool back there. Today I just gave the go ahead to Cannon Marine down in nearby Longboat Key to order me a Yamaha 6 horsepower, long shaft, four stroke outboard. The price is nearly $300 less than a similar model Mercury outboard from West Marine or Bradenton Beach Marine. Monday I’ll know when it will be delivered. It has to be ordered from Yamaha as it’s not in stock but will be coming in with some other, larger engines they’re going to be ordering. When I get it I plan on doing a bit of cruising around the area. Up into the Manatee that goes through Bradenton and into Sarasota and the Hillsborough River that flows through downtown Tampa. I want to go up there and check out the Jean Street Boat Yard. It’s the only one close by (40 miles away) that will let you work on your boat yourself. I need to paint the bottom to fend off the barnacles and other flora and fauna that grow on it in these warm, shallow waters. An interesting side bar to the Jean Street yard is that it’s the oldest boat yard in the entire state of Florida, opening its doors for business in 1848!!!

Comments Off on Further Adventures In DIY Boat Maintenance