I didn’t say the “Lesser of two evils” because there are certainly more than two evils lurking out there.

I use two of the most hated retailers in the United States: Walmart and Amazon. Yes, I sometimes feel guilty about it but that’s life, right? I absolutely detest giving a penny to Sam Walton’s kids, but with some things there’s just no getting around it. When is was anchored off of Anna Maria Island, Florida,  I got the meds that keep my blood pressure in check and lessen the severity of my COPD from CVS. Since finding out that that enterprise has contributed heavily to conservative Republikunts I have issues with them, too. I used CVS because it was a bit less expensive than Walgreen’s  and, conveniently, it was right on the island’s free trolley service. The Wally World pharmacy over there was in Bradenton, on the mainland, an area I always referred to as “The Dark Side.” To visit there was a three hour exercise in bus rides and patience.

When I traded in pelicans and dolphins off the island for manatees and alligators deep in the swamp in DeBary off the Saint Johns River, I switched the prescriptions over to Wally World. They have a pharmacy only a couple of miles away once I slog through 3 miles of dirt road and hit pavement. CVS is a lot further away. Plus, if you’ve been following me recently you know that I’m planning a mega road trip soon. I plan on heading up to New York state to rent a boat for a few hours on Lake Ontario and then head over to Minnesota and do the same thing on Lake Superior. Then I can claim to have been boating on all five of the Great Lakes. ( I did the lengths of Michigan, Huron and Erie back in 1974 when I took a boat from Chicago to Fort Lauderdale, but that’s another story).

When I’ve done the boat thing I plan on traveling down US Rte. 61 from Wyoming, Minn. to New Orleans, stopping off in Canton, Missouri, where I went to college. I spent two years living with 61 rolling right past my front door.

Later on in life I used to wait for the streetcar on Baronne Street near Canal in New Orleans and look at a stone cenotaph marking the southern terminus of Highway 61.

The thing about using the Wally World pharmacy is THEY’RE EVERYWHERE. When running low on my meds I’ll be able to find one more easily than trying to do the same thing with CVS.

The other loathsome enterprise I use, and I use it a LOT, is Amazon.com. Their prices are nearly always the lowest, and instead of running around to a half-dozen retailers that don’t have what I want anyway, with just a few clicks of the trackpad on my notebook computer I’m able to find what I want/need and have it delivered within days. In fitting out for this proposed expedition I’ve purchased a tent,

And a lockable cargo container to put in the carrier. It will hold things like a folding chair that I may purchase at Wally World, my single-burner stove and 11 lb. propane tank, kitchen utensils, etc. 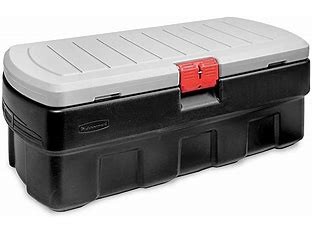 These things are scheduled for delivery this Thursday. By the end of the weekend I should have the stuff together and ready to hit the road.

One of the reasons I don’t particularly mind using Amazon is that the Great Orange Wart, Donald Trump, DETESTS Jeff Bezos and the enemy of my enemy is my friend.

I plan on making my departure soon after the 4th of July. I have to be here for the 18th of June to meet with my new physician and then I’ll wait out the roadside carnage festival that a long three-day holiday weekend creates. When I was touring around on my boat I used to drop anchor Friday evenings and not get moving again until the weekend was over.